IN PERSON OR ONLINE VIDEO SESSION

In your healing session Miguel will become a vehicle for Cernunnos to speak directly to you. The transmission is in the form of a primal, sacred, dark language and is a type of what is often known as light language; it will usually last just a minute or two. You will not understand the words but you may innerstand the message and you will feel the power of the frequency.

If it is an in person meeting , immediately after the transmission (with your permission), Miguel will place his hands on you and you will receive more surges of powerful healing energy.

People often find that the transmission takes them into an altered state of consciousness and they feel a deep peace . Unusual body sensations are common and a lessening of any physical pain often takes place. More strength, courage and determination are also common.

Sessions will usually be no longer than half an hour and the suggested donation is £33.00

This the Paypal link: https://paypal.me/migueldeanauthor

Please note: Re-scheduling of appointments must be advised at least 48 hours before planned date / time.

Please use the calendar to schedule your Horned God Healing Session 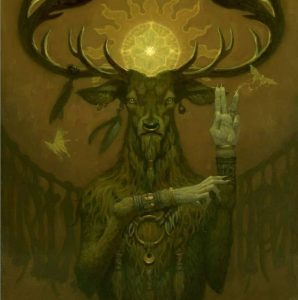 I was about twenty five years old and living on a peninsula off the west coast of the Scottish Highlands. I was a New Age Traveller and a small group of us were squatting an old croft village that had been derelict since the Scottish Highland clearances. We transported our belongings by boat as it was a two mile walk over the hills to get there. It was a beautiful wild place. We supplemented our diet with foraged shellfish, seaweed and venison was a common treat for us and our dogs as we would periodically find dead deer beside the nearby railway line.

One morning, after a long period with no venison my friend Mick and I decided to go out hunting. I had trained my dog to hunt rabbits, though she had shown her keenness to hunt larger prey and my friend also had two dogs. So we set off early one morning up the valley, to where we knew the deer herd would often be. Sure enough the dogs indicated that the deer were nearby and we let them loose, running as fast as we could over the rough highland terrain in pursuit of them. Pretty soon we heard barking in the distance, which indicated that the dogs had isolated a beast from the herd. As I ran I remember thinking that it would probably be a weak member of the herd but on arrival at the place where the barking was coming from we saw that the quarry was a young stag, in his prime with huge proud antlers.

The dogs bayed, circling the deer who thrashed about wielding his antler weapons and at one point he pinned one of the dogs to the ground. Sensing that something needed to be done my body intelligence kicked in and without any mind involvement I threw myself at the deer while he was distracted by the dogs and manged to grab his antlers from behind in order to protect myself from their spears. The dogs had tired him and I was able to hold him still while I drew my knife. I remember that I felt a deep sadness at this point. I hadn’t really thought things through (as was often my way) and this point of taking the life of such a beautiful, noble brother pained me. But what was begun needed finishing and so with presence and a heavy heart I cut his throat and stroked his neck as the blood ebbed from his body with his last breath.

It was a surreal moment, which only now, thirty years on do I really understand the significance of.

We butchered the carcass and took back the meat, leaving the antlered head on top of an outcrop of rocks. I can still see the image clearly.

I realise that some people may choose to judge my actions but my knowing is that it is not just about what we do but HOW we do what we do. I was a young man and not as a wake as I am now and I know that I would like to have treated the experience with more reverence than I did. Never the less I know that even then I was connected to spirit (as if we are ever not!) and had a deep love of The Mother, all of the animal kingdom and the wild places. The finality of death is an illusion, in fully honouring Life we must also honour death and remember that energy and form is always changing. This is the sacred cycle of death and rebirth that Cernunnos reminds us of.
That day was an initiation, a rite of passage that has only just come full circle.
What I now know is that as Life left the stag its spirit and the energy of Cernunnos entered me. There have been many clues to this truth; for example I have found myself drawn to Celtic symbols (as Cernunnos is the High God of the Celts) and I have been moved to walk the land every day for the last 14 years, spreading bird seed for my winged kin and prayers and blessings as I walk. Wild animals and birds are increasingly becoming my friends. His focus has increasingly become my focus and now that I know that I have been chosen as a channel for him I can see how he has actually been with me all these years. Thank you to all of those people who saw this in me while I still doubted.

During a profound plant medicine journey, as a vehicle for deeper surrender into The Mystery, The Horned God began to speak through me and now I can always feel his presence. When I call him I find myself taken into an altered state, energy courses through my body and light language is spoken through me. It’s all very intense but beautiful, profound and deeply sacred. When he is in me I feel a power that I have never experienced before. He carries a primal strength and there is a deep sacred darkness about him. The hunt all those years ago was the start of this aspect of my magical life journey through extreme adversity, pain and suffering to love and truth and the man I am now becoming. I am deeply humbled.

As you can imagine it’s taking a while to integrate this and I feel a little self conscious about the whole thing. I guess some will judge me and not believe this magical story and I don’t blame them. But I am no longer interested in external validation and I know that whatever arises as a result of this incredible development is Miguel’s medicine and a blessing and will benefit all of Life. We shall see what comes next!

The Celts and druids sacred traditions were aural as they believed that the magic or sacredness was lost somewhat and could be manipulated once it was written down. I stopped reading over a decade ago and I now know this has also been Cernunnos’s influence. So I shan’t be writing much more about this or recording anything. But he wants to speak through me so that the frequency of his energy and power are brought into this now time and place dimension at this amazing time of Ascension and The Great Turning.

I pledged my Life to the service of humanity and all earths beings many, many moons ago and so if this is what Life now asks of me I gladly and humbly will do my best to be worthy of Cerunnos’ grace. He now speaks through me into the Avalon Men’s Circle and we shall see where else we are invited. One thing I know is that it is a sure sign of the rising, healing and reawakening of The Sacred Masculine. All the sacred masculine archetypes have a place in my heart but now there is a special home for Cernunnos within me. ‘All is well and all manner of things shall be well.’ Blessed Be!